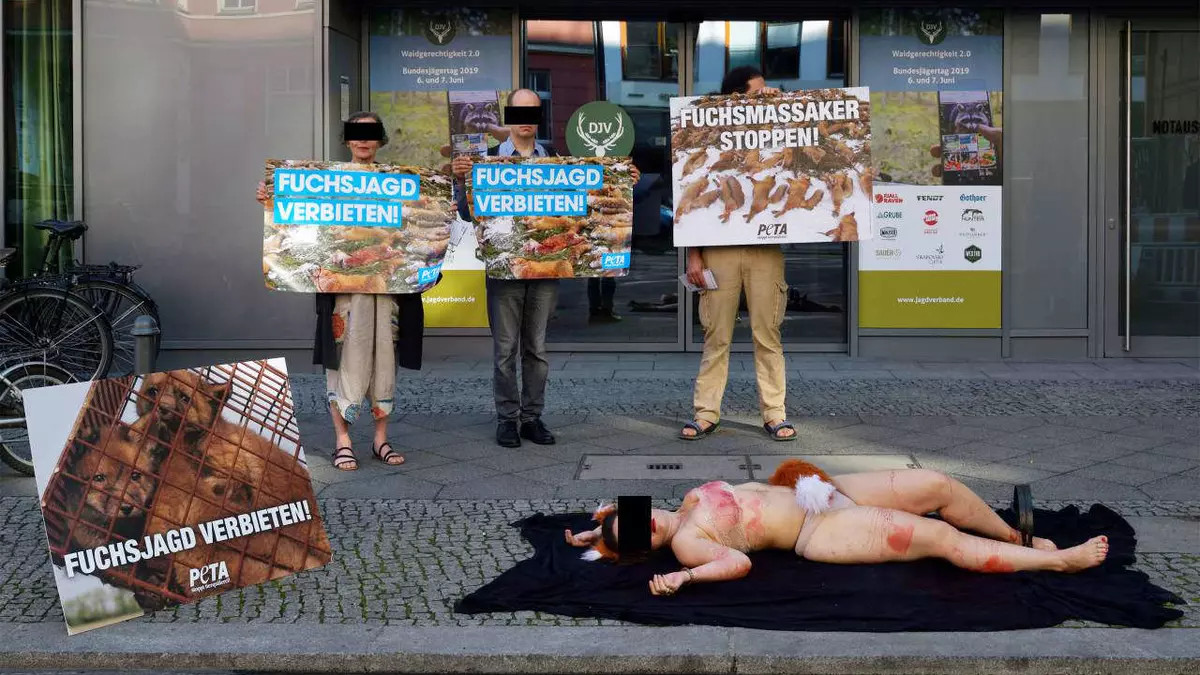 The animal rights organisation, PETA, does not have the right of action for animal welfare organisations in the Federal State of Baden-Württemberg. This has now also been confirmed by the Federal Administrative Court.

The Organizational Structure Makes the Difference

The Hunting Association is Satisfied

Already after the first court decision in April 2020, the German Hunting Association (DJV) and the State Hunting Association of Baden-Württemberg (LJV) felt that their opinion had been confirmed. In their opinion, PETA is primarily a non-transparent political lobby organisation that demands human rights for animals, but hardly contributes anything to practical animal welfare in reality.
Interested parties who want to become full members of the animal rights organisation will be disappointed, according to the Baden-Württemberg Administrative Court (VGH): “Overall, access to full membership is made unreasonably difficult”. There is neither an application form for ordinary membership on the homepage of the animal rights organisation, nor are interested parties informed about their rights. Only a supporting membership, which has no influence on the association’s activities and only serves to finance the association, is easy to obtain. The Stuttgart Administrative Court had already rejected the claim in the first instance in 2017. The appeal against this before the VGH was unsuccessful.

Legal Opinion: Questionable Use of Funds

PETA has repeatedly drawn attention to itself with questionable actions. A legal opinion available to the DJV concludes that a number of points suggest that the management of PETA Germany violates the non-profit privilege and uses funds contrary to the statutes. For example, a leading person of this organisation had already been found guilty of incitement to sedition in the first instance.
The criminal proceedings were discontinued in 2010 in the appeal instance according to the article §153 of StPO (Code of Criminal Procedures) after payment of a fine of 10,000€, which was higher than the fine imposed in the first instance (Stuttgart Regional Court, file number: 35 Ns 7 Js 2717/04). Among other things, they claimed that the militant fight for animals was an advocacy for justice; a life was always worth more than a broken door or a meat truck set on fire.

Zoos are positive for species conservation

Javier Almunia, doctor in Marine Sciences and president of the EAAM, assures that there is an “anti-zoo lobby” that pressures companies not to commercialize parks with animals in their tourist offerings

In recent times, certain travel agencies and tour operators have decided to stop marketing zoos due to changes in their animal welfare policy. The latest of these has been Expedia, after a year of collaboration with the World Association of Zoos and Aquariums (WAZA) to reach an agreement on what elements the parks had to comply with to ensure good conditions for the animals.

“This is obviously the product of pressure from an animal rights lobby that is not really interested in conservation, but in eliminating zoos,” says Javier Almunia, PhD in Marine Sciences and president of the European Association of Aquatic Mammals (EAAM). In an exclusive interview for Tourinews, Javier Almunia, who is also president of the Iberian Association of Zoos and Aquariums (AIZA) and director of Loro Parque Fundación, analyzes what is behind this measure and what is the positive impact of zoos on the conservation of species.

Question (Q): How many cetaceans are there right now in the Loro Parque facilities?

Answer (A): In the Loro Parque facilities, right now we have a little more than a dozen cetaceans in total, including orcas and dolphins. Many organizations state that there are about 3,500 cetaceans in captivity worldwide and this, from a conservation point of view, is a very small fraction of the animals of this species. For example, in the case of dolphins, it is estimated that there may be as many as 30 million dolphins worldwide, so those in captivity probably represent less than 1% of the species. In the case of killer whales, it is estimated that there are about 52 worldwide in captivity, while in the wild there may be as many as 50,000. In other words, these animals have no impact on the conservation of the species. Firstly, because the species are not endangered and, secondly, because they have not been captured from the sea for a long time, but are maintained by breeding programs within the zoos themselves.

Q: The same decision that Expedia has taken has already been taken by Thomas Cook or Virgin Holidays, among others. What is really happening?

A: Yes, there are processes that are very similar and that gives some idea of how these things work. In the case of Expedia, a year ago they announced that they were going to modify their animal welfare policy and that they were going to reevaluate the different parks they were going to work with and market. At that time, from the zoological associations, where the real experts in animal welfare are, we contacted them and we put ourselves at their complete disposal to discuss what would be the key elements that the parks should comply with, to ensure that these animals are in good conditions. After more than a year of working with Expedia, in a completely abrupt way, they broke off that collaboration and decided unilaterally that they were going to remove the parks with cetaceans from their offer. This, evidently, is a product of pressure from an animal rights lobby that is not really interested in conservation, but in eliminating zoos.

Q: What kind of lobby?

A: It is an anti-zoo lobby. They generate a lot of pressure on tour operators through campaigns, mail bombing, saturating their customer service centers… They force them to take a decision that is not difficult for tour operators, since zoos are not a big sector in their sales. In this way, applying this measure works out quite well for them because economically it does not impact them too much and they make a great public demonstration of an apparent love for animals that, in reality, is not such. It is exactly the same thing that happened with Virgin Holidays in 2014.

Q: And who is behind this movement against zoos?

A: They are people who emotionally have an enormous connection with cetaceans and feel a great sorrow for seeing the animals in zoos, according to them, deprived of freedom. They put freedom far above the welfare or conservation of the species. I believe that these people are sincere and attack what bothers them and, in this case, it is the companies that have cetaceans under human care. There is no way to convince them rationally and with evidence that the animals do not suffer, that they have a good state of well-being and an excellent state of health, that they live longer than in the wild. But all these things do not impress them because what really bothers them is the lack of freedom. They simply want to do away with zoos, they are not concerned about the welfare of the animals or the conservation of the species. The data says that interaction with fishing kills 300,000 small cetaceans a year. In other words, if anyone is concerned about the conservation of cetaceans, they should go and demonstrate in front of the big fishing companies. However, none of these organizations have done anything to put an end to this problem. It is much easier to look for a target that is well known worldwide and much weaker, such as zoos.