Loro Parque welcomes a newborn calf of the orca Morgan

Loro Parque has good news to share: the orca Morgan that was rescued after being found near dead near the coast of the Wadden Sea in the Netherlands and that forms part of our group of orcas, gave birth to her first calf this morning, which finds itself in a perfect state of health. From the very first moment, Morgan demonstrated to be an exemplary mother attending to her newborn, which is swimming next to its mother in the installations of the ‘OrcaOcean’. 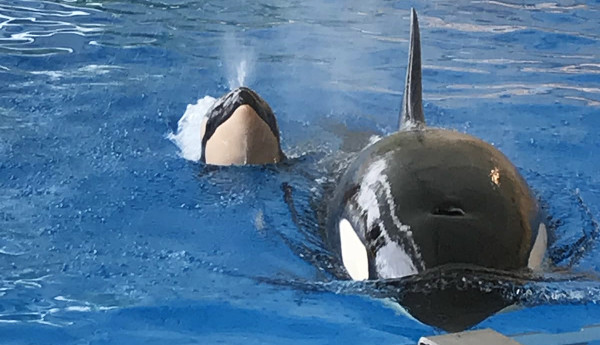 The orca Morgan was rescued at the coast of the Wadden Sea in 2010 and was attended by a team of experts of the Harderwijk Dolphinarium in an effort to help the lost animal, which showed such a severe malnutrition that the animal was only skin and bones. In this moment, Morgan only weighed 430 Kg and the keepers of the Dutch dolphinarium were not sure that the animal was going to survive the first night after its rescue. They, however, were hopeful that with a proper level of care, affection and attention of the care givers, as well as with the adequate nutrition, the animal could make a recovery.

Thanks to all these efforts of the team at Harderwijk, the animal began to recover its weight and strength, and as the Harderwijk installations were not prepared to keep orcas, the Dutch authorities initiated a formal commission to determine the future of the orca Morgan. A group of international and independent experts came to the conclusion that there were only two viable alternatives for the animal: euthanasia or to be kept at an installation of an aquarium that complied with the necessary conditions for this animal species.

At this moment, as Loro Parque had the most modern installations for orcas in existence, the Park was contacted to see if it would accept the animal. Despite all the challenges that this request represented, Loro Parque accepted the petition, thus, avoiding the only other alternative that was left for the animal: the euthanasia.

After a few months at our installations, the orca Morgan adapted to the new conditions and integrated perfectly into the existing group of orcas at Loro Parque. At the same time, it was discovered that the orca suffered a severe hearing deficiency, which was yet another argument to confirm that animal was incapable to survive on her own in nature.

Given this last circumstance, there were a number of questions as to what exactly a delivery would imply for the animal without a hearing capacity. Today, Loro Parque would like to share the great news: the delivery went in a completely normal manner and the first hours after the birth have been developing in accordance with the best expectations.

It is impossible to know the gender of the new calf yet, although the most important issue now is that both, the mother and the calf, find themselves in a perfect state of health. Loro Parque will be informing the public about the development of the situation, and would like to take this opportunity to thank all its visitors from many different parts of the world, the tour operators and all the collaborators in the scientific field for all the support to the Loro Parque mission: to protect and conserve animals and their natural habitats for future generations.