Poema del Mar begins its construction works today. The “first stone” ceremony took place in the Sanapú Pier, lead by the Kiessling family, owners of the company Loro Parque in Tenerife and to which this new project will be a part of. Also family members, collaborators and tourism representatives together with authorities and friends were part of the event.

After the Kiessling family laid the first stone, Christoph Kiessling, vicepresident of Loro Parque welcomed everyone and presented the project’s progress and some details of the construction. The president of Loro Parque, Wolfgang Kiessling, emphasised the importance of the project as a clear bet towards expanding the company; which has existed in Tenerife for more than 42 years and has always seen the Canary Islands as a unique region. “The love for nature has no boundaries and the water helps us to defend it”, he stated. 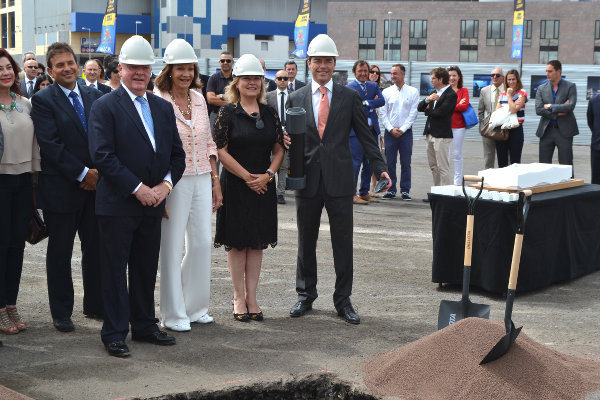 Throughout its history, Loro Parque has become, along with Siam Park in Tenerife, one of the most acclaimed tourist entities on the island and a “must” visit in the Canary Islands. In fact, both have been awarded recently by Tripadvisor: Loro Parque as the Nº1 Zoo in Europe and third in the world, and Siam Park as the Nº1 water park in the world.

With a constructed surface of 12.519 square metres and 7.509 millions of litres of salty and sweet water, Poema del Mar will be one of the most modern and spectacular aquariums of the world. Poema del Mar has the objective of becoming a referenced centre for the conservation and awareness of the marine species.

Commitment to the environment

Loro Parque’s hallmark is, apart from the variety of animals, the quality of its facilities and respect to the environment, for which it has received diverse national and international distinctions. Apart from that, it has also been awarded with quality and environment commitment seals. That philosophy will also be visible in Poema del Mar which, once it is open, will introduce quality ISO 14000, ISO 9000 and EMA standards, apart from the Biosphere Park – Animal Embassy certificate, granted by the Responsible Tourism Institute (ITS), connected to the UNESCO.

In this line of quality acknowledgements, Loro Parque has received the Tourist Merit Badge, awarded by the Spanish Industry, Commerce and Tourism Ministry and the “Gold Medal to Tourism Merit” awarded by the same ministry. It has also been awarded the Gold Medal from the Canarian Government, the city of Puerto de la Cruz and from the Tenerife Government, among other awards. Additionally, Loro Parque is the only company in Canary Islands to have been awarded the “Príncipe Felipe Prize for business excellence”, besides the Trip Advisor awards previously mentioned.

As part of its commitment to the environment, Poema del Mar will also firmly bet on renewable and non contaminating energy, to contribute to the development of sustainable tourism in Gran Canaria and therefore have the most modern existing filtration, purifying and desalination systems. Likewise it will install diverse recycling banks so visitors can separate and deposit residues in order to facilitate the gathering and following treatment.

As it is doing in Tenerife with its own plant of 2.75 MW of installed photovoltaic power, the aquarium will promote the use of this type of green energy, therefore the power will be increased by installing more than 150 KW generated through a system of photovoltaic panels; this will contribute to saving and decreasing emission of around 2,400 tons of CO2 into the atmosphere each year.

Poema del Mar, a reference for marine conservation in the North Atlantic

The partnerships between Loro Parque and reputable academic and research institutions of Gran Canaria and the world will also be strengthened with the creation of Poema del Mar. Thus, the collaboration that has existed for years with the University of Las Palmas de Gran Canaria, the Institute for Animal Health and the Island Government regarding marine wildlife rescue, will intensify. In this narrow framework of institutional cooperation, new lines of conservation of marine species, especially the Macaronesian region and the African Atlantic coast, will be enhanced.

The activities of the aquarium Poema del Mar will be coordinated with Loro Parque Fundación, an organization with over 20 years experience in the development of research, education and conservation worldwide. Since 1994 the Foundation has conducted more than 100 conservation projects in 30 countries over the world, and has spent more than $ 15,000,000 for the preservation of highly threatened animal species.