Spirtle The Dolphin Was Spotted Speeding To Recovery

Original article: Spirtle The Dolphin Was Spotted Speeding To Recovery

Scotland isn’t exactly the first place a person thinks of when worrying about getting a sunburn. However, a dolphin affectionately known as “Spirtle” has proved that sunburns can happen anywhere and on any animal. And we’re talking about a really bad sunburn.

Spirtle was first spotted in May, while stranded on a large expanse of tidal mudflats near Aberdeen, Scotland. The bottlenose dolphin, after being stuck in the sun for nearly a day, was rescued and refloated. It took a group effort thanks to a team of multiple organizations, including British Divers Marine Life Rescue, the Scottish SPCA and staff from North 58 Sea Adventures. You can read the full story covering the rescue here. 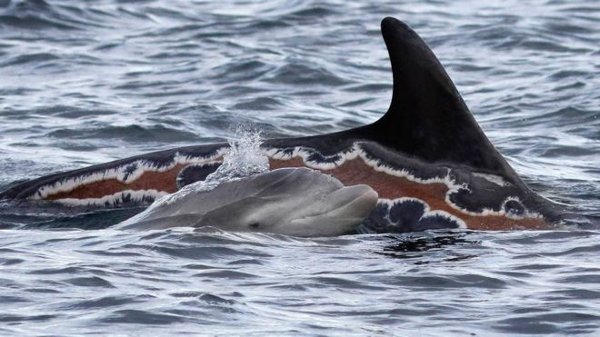 Dolphin skin is crucial in their ability to efficiently swim at high speeds. SeaWorld describes their skin as soft and rubbery and it has evolved into a texture that reduces extra drag. They shed their outer skin every two hours in order to keep their skin in prime streamlined condition. In recent years, researchers have noticed that sunburns on cetaceans have been increasing, as noted in Science magazine. Many are attributing this trend to the reduction of the ozone layer.

Before the stranding, Spirtle was already apart of a group of 200 animals that were being monitored and observed by scientists from the University of Aberdeen. Shortly after the rescue, Spirtle was counted as M.I.A. until the later part of July. BBC notes that scientists were actually skeptical that she would survive her serious injury. When she was seen again, researchers were excited to report that she was showing positive signs towards a full recovery. Her most recent sighting was in mid September, when she was seen babysitting her sister’s calf. Spirtle is easily recognizable because of her severe wound, so there was no doubt that the bottlenose dolphin was her.

Researchers are very encouraged by the fact that the wound seems to be healing well and shows no signs of infection. They are hopeful that she will make a full recovery and will eventually even go on to breed and raise little ones of her own.