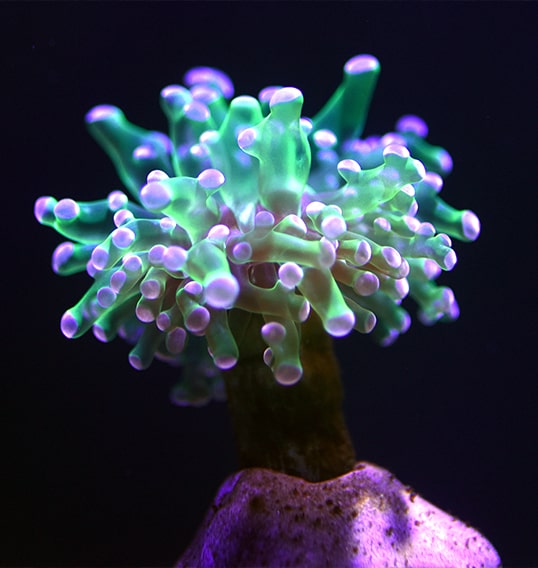 Corals are tiny marine animals that are mostly organised in colonies of hundreds or thousands of individuals. Most of them grow in clear, shallow water, as they need sunlight for the algae that surround them. However, there are also corals capable of living at depths of around 3,000m, but these do not establish symbiotic relationships with algae.

They are crucial in the conservation of marine biodiversity, as almost 25% of the existing marine creatures live in their structures.

They are often mistaken for marine vegetation, but they are animals.

Some of today’s coral reefs began forming more than 50 million years ago.

Pollution or changes in water temperature stress corals. The response of these communities is to expel the surrounding algae, which leads to coral bleaching.

How we help the conservation of corals and other marine animals

Today, they are seriously affected by factors such as pollution and global warming. Coral reefs are considered the most threatened marine ecosystem in the world.

The large-scale coral reef at Loro Parque was one of the first aquariums of this kind open to the public.

Since then, we have been working to raise awareness of the importance of these animals and the necessary actions for their conservation.

In addition, Loro Parque Fundación supports projects such as CanBio, led by the Government of the Canary Islands and focused on the study of the effects of climate change in the sea.