First birth of a Chinstrap Penguin

For the first time a chinstrap penguin chick was born at Loro Parque, a species that owes its name to the thin black line that runs from ear to ear under the chin. This birth is considered a real success as it is a very delicate penguin and it is quite a challenge to breed this species in a zoo.

Isidoro, named after Saint Isidoro, weighed 77 grams at birth after an incubation phase of 38 days. The diet the penguin chick is receiving consists on formula made with blended fish, very liquid during the first weeks and thicker as the chick grows bigger. To guarantee a balanced diet, different kind of fish is used in the formula that is given to the chick every three hours. 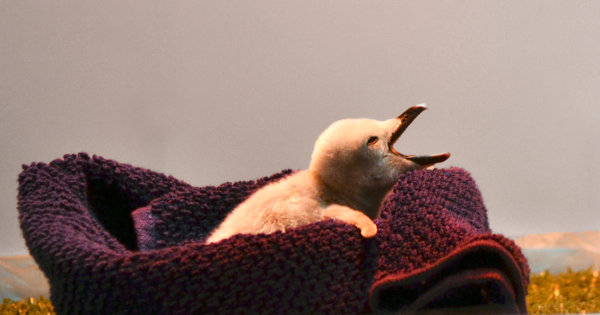 During approximately two months, the penguin chick will be hand bred in the Baby Station at the penguinarium, breeding station where visitors will be able to see it and where it will receive all the care necessary during this first stage. After this period, the integration process begins, where the penguin chick will start adapting to its new environment until fully integrating with the rest of the penguins at Loro Parque. Chinstrap penguins are a species that live in waters near the Antarctic; they are medium size (46 – 61 cm) and weigh between 5 and eight kilos. They are able to dive up to 70 metres deep.

A prosperous new year is expected in the penguinarium of Loro Parque as rockhopper and gentoo penguin chicks were also born, reaching 14 chicks in total that will join the large penguin family visible at Planet Penguin, exhibition that recreates the Antarctic habitat.

The birth of new chicks is a good indicator of animal wellbeing as it guarantees that the animal’s necessities are covered and that they reproduce normally. At Loro Parque every detail is considered as not only their natural habitat is recreated, with 12 tons of snow generated to fall into the area, but also the light cycles of the Antarctic are respected, recreating at this time the polar spring, when they enjoy plenty of light and longer days.