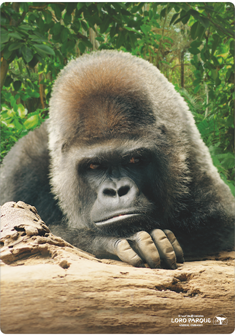 The Loro Parque family is deeply saddened by the death of the gorilla Schorsch.

Schorsch turned 50 years of age in March and was the oldest gorilla of the Bachelor group that lives in Loro Parque. He had a great character and although he turned a little grumbly with age, he had the affection and sympathy of all the keepers and leaves a great void in our zoo family.

Originally from Nürnberg Zoo, Germany, Schorsch arrived at the park in 1994, and was the son of Fritz, one of the oldest gorillas in Europe.

With the years Schorsch had lost visual acuity, but this did not prevent him from still locating his environmental enrichment by touch.

From an animal welfare point of view, it is a milestone that Schorsch has reached half a century, as the average life expectancy for this species in the wild is about 37 years.

In addition, the western lowland gorilla is critically endangered and its populations are in decline due, among other reasons, to poaching and diseases, such as the Ebola virus. Fortunately, the population managed in a coordinated way by European zoos has a good number of specimens, three quarters of which were born under human care. Our bachelor group is a key part of this European captive breeding program, as it allows for greater genetic exchange and helps to manage family groups in other zoos.