Six rays are born in the aquarium of Loro Parque

Once again the Aquarium of Loro Parque has been successful with its breeding program. This time six young, strong and healthy, rays (Dasyatis Americana), in the Canaries known as “chucho”, were born.

After an uncomplicated birth, the team of professionals in the aquarium decided to keep the youngsters in a floating tank within the big exhibition tank. This way they guaranteed that the newborns don’t suffer any brusque water changes but are protected from all other fish that lives in the big exhibition.

These rays are Elasmobranchii of the Dasyatis family, whose area of ​​expansion is confined to the tropical and subtropical seas of the southern Atlantic Ocean, the Caribbean Sea and the Gulf of Mexico. They have a flat, diamond-shaped body, which is mud brown on top and white on the belly. 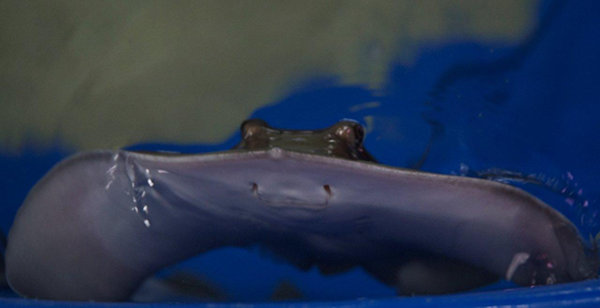 It is a species that tolerates wide ranges of temperature and salinity and feeds on large invertebrates. Its reproduction is viviparous and can produce between 4 to 7 offspring. The gestation period is quite short compared to other species of rays; it only lasts four months allowing females to reproduce twice a year. The average size of these specimens is 40 cm wide, although the maximum records are 60 cm for females and 57 cm for males.

Loro Parque once again shows its commitment to the protection and conservation of animals, demonstrating the success of its breeding system within a philosophy that has turned the zoo into the embassy of exotic animals.