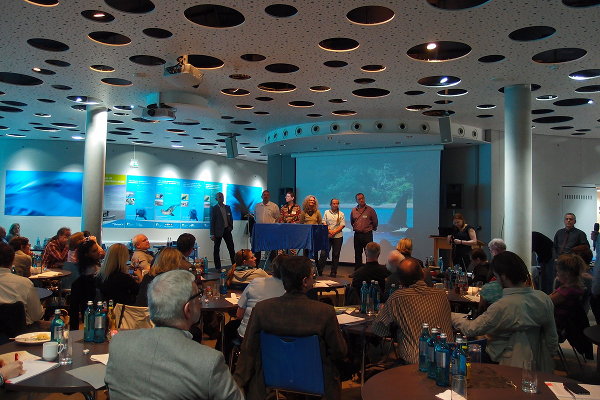 On Wednesday, 4th of May, the first expert conference was hosted by Nuremberg Zoo about Animal Welfare Indicators under the aegis of the European Parliament Intergroup “Climate Change, Biodiversity and Sustainable Development” which was represented by intergroup chairman, Czech deputy of the European Parliament, Pavel Poc. The European Office of Nuremberg has offered the highlights of the accomplishments of this event.

The following members of the international association of zoos and dolphinariums participated in the development of the idea, policy, organization and funding of the event:

The target of this expert conference was to face the opponents in the social debate about the keeping of animals in zoos with the basic research and frame a consensus, based on academic knowledge, which describes a research concept to answer the most urgent questions about animal welfare in zoos.

For this reason, the programme was divided into the morning session where recognized experts got a chance to speak, while during the afternoon session a platform was created so that 80 association members and scientists were able to discuss concrete questions enabling a consensus beyond the socio-political differences.

In his welcome address and introduction highlighted the patron of the expert conference that the well-being of the animals is on top on the agenda:

“Animal welfare is high on European agenda. For years, EU has been working on an animal welfare agenda. Implementation of the legislative aspects of animal welfare have to be carried out based on the principle of subsidiarity. Member states have to enforce it. Animal welfare indicators are important for deciding on the standards.”

The first part of the expert conference was to outline “Welfare Science” and the research about Animal Welfare Indicators.

“My main concern are the non-charismatic animals. Those that we consider as boring, those that are not receiving the necessary attention from the media and the zoo visitors. How rich might their inner lives possibly be? We need science, a lot of science to also place these species into the spotlight of attention.”

In a forum at the specialist conference representatives from zoos, administrative bodies, universities and non-governmental organizations answered the questions of the audience.

Current zoo researches in relation to in-situ conservation actions were covered in the speeches by:

In autumn, the outcomes of the expert conference shall be presented to EU parliamentarians and members of the European Commission in Brussels.