Puerto de La Cruz, 17 December 2022. Loro Parque celebrated the big commemorative event for its 50th anniversary yesterday, Saturday 17th December. On the same day, but in 1972, Loro Parque opened its doors for the first time. The celebration, which brought together more than 1000 people, served to pay tribute to the entire trajectory of the institution.

The party started in the morning with a parade through the streets of Puerto de la Cruz to the entrance of the park, where visitors were welcomed in a special way, with a snack and other gifts.

Later, at 17:30, a festive atmosphere began to form in the Thai Village, with the arrival of the first guests and the performance of a typical Canarian folklore group. Afterwards, the attendees began to make their way to Orca Ocean where the commemorative event was to be held an hour later. 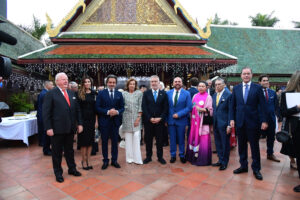 Along the way there were several surprises that attracted the attention of the people heading towards the orca stadium, such as several body painting exhibitions or the special lighting throughout the park. On the screen of Orca Ocean, several congratulatory videos were projected on the arrival of the guests, where the friends of Loro Parque wished the institution a prosperous 50th anniversary.

At 18:30, the performance of the singer, Cristina Ramos, opened the event. This was followed by the special presentation of Orcas, which left no one indifferent. In addition, the occasion was used to present the special 50th anniversary video in which, through the words of the founders of Loro Parque, Brigitte and Wolfgang Kiessling, a review was made of the long history of success that the entity has had since its beginnings. 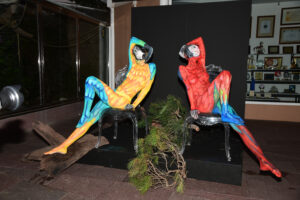 Illustrious personalities took part in the speeches section, such as the President of the Government of the Canary Islands, Ángel Víctor Torres, who highlighted the important work of Loro Parque in terms of biodiversity conservation and animal welfare. Others such as the bishop of Tenerife, Bernardo Álvarez, and Professor Theo Pagel, former president of the World Association of Zoos and Aquariums (WAZA).

For his part, the founder and president of Loro Parque, Wolfgang Kiessling, spoke about everything he has experienced during this half century and had words of thanks for his family and friends. “I would like to thank all those people who have accompanied and helped Loro Parque throughout all these years, until we became the great institution we are today”, said Kiessling.

Later, the world’s largest certifier of animal welfare practices, American Humane, made a donation of 50,000 dollars to the Loro Parque Foundation. “In this way we want to contribute to Loro Parque’s extraordinary performance in the conservation of the animal world,” explained American Humane’s president, Robin Ganzert. 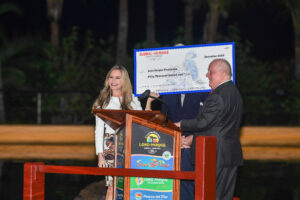 A spectacular performance by acrobats and singer Cristina Ramos rounded off the event, which was followed by a big party at the entrance of the park.