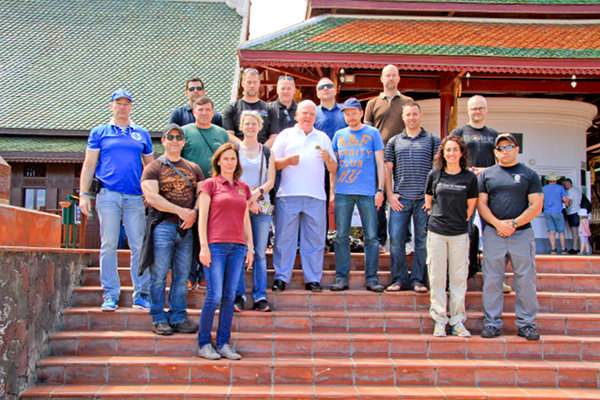 This Wednesday, 11th of May 2016, Loro Parque participated in project which is unique in Spain – the international exchange programme STAR where a group of policemen from the United States and Germany met on Tenerife to share experiences with their colleagues of the local police station and give important information to the society. At the same time the officers made use of their stay on the island to explore the Loro Parque, the best zoo in Europe and second best in the world, according to TripAdvisor, and its scientifically labours and commitments related to environmentalism.

The policemen had the possibility to visit the newest exhibition inclusive the recently opened aviaries of South America and received information about the international research and conservation projects which Loro Parque creates as an international example of a modern zoo. Additionally the American and German officers enjoyed the educational presentation and visited the innovative and emotional facility Animal Embassy with its babystation for the hand rearing of birds, the clinic and their work.

Our guests also visited Loro Parque Fundación to demonstrate them our 120 international projects of this non-governmental organization which are maintained since the founding in 1994. A worldwide work for the conservation of animal species and their natural habitat in which the foundation already spent more than 16 million US-dollar. Next to many successes the most important ones are the conservation of two parrot species which were critically endangered and a significantly growing of their populations.

STAR is an international exchange programme for policemen where officers from the United States, Germany and Switzerland can participate to train their abilities related to coordination and colaboration of police authorities. Thanks of the participating of Spain in this pioneer projects it takes place for the first time on the Canary Islands and includes numerous lectures, workshops and joint actions.