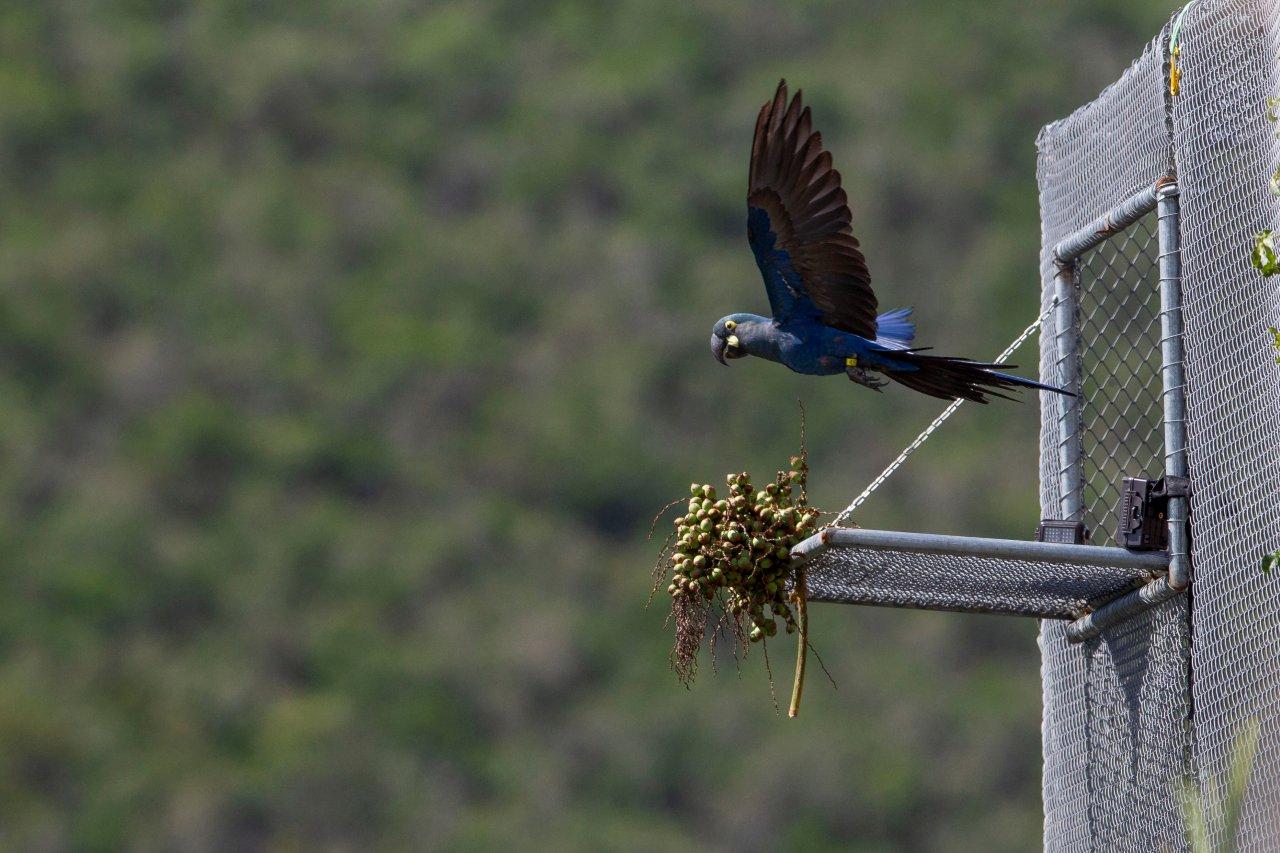 The six specimens of Lear’s Macaw (Anodorhynchus leari) born in the Loro Parque Foundation’s facilities and moved last August to Brazil for their reinsertion in nature have already managed to adapt to the harsh conditions of their habitat in the Caatinga and are now flying free in the wild.  The parrot is one of the most important projects of the Foundation, which has managed to move its category on the Red List of the International Union for the Conservation of Nature (IUCN) from ‘critically endangered’ to ‘endangered’.

The protection and progressive recovery of this species has been a long road and a lot of work, in which is highlighted the work performed ex-situ by the Loro Parque Foundation, to whom the Government of Brazil transferred two pairs 13 years ago, in 2006, with the aspiration that they could raise and save a species that was in a situation similar to that of the Spix’s Macaw, now extinct in nature.

In a matter of six months, they managed to help the birds start reproducing and, since then, more than 30 specimens have been bred in Tenerife.  However, the Foundation’s objective has always been to enable them to return to their natural environment and, once there, to ensure their sustainability.  During this time, a total of 15 specimens have been sent, nine of them to participate in the National Action Plan for the conservation of the species, achieving a notable increase in the population.

The last six individuals to arrive in Brazil have spent a period of adaptation in a large aviary based in a natural environment, with plants typical of the ecology of the species and where they have become familiar with the sounds of nature and with the conditions of the area where the Lear’s Macaw was previously found.

During this process, the project team had to face several challenges: that the birds could adapt to eating the fruit of the licuri palm – which the species feeds on – at the same speed as other wild birds, given that they were accustomed to a softer meal, or that they stopped drinking water directly from a drinking trough and began to consume that which they obtained from the fruit of the palm trees are just two of them.  However, all were gradually overcome and successfully, whilst they were also trained to increase their cardio-respiratory capacity and to react to sounds of possible predators.

It was the most determined specimen, the most curious of the six that was the first to leave the soft release aviary to inspect the area and serve as an advance guard for the rest of the group. In this situation, and for safety reasons, he made the first flights equipped with a locator to record his movements.  Once he established the distances and returned safely to the precinct, the gate was opened for the others.

The nearby palms were provided with large bunches of licuri fruits to avoid them having to make great efforts in the search for food during their first experiences in their natural habitat. Thus, they gradually left the enclosure and found very similar conditions without having to make long journeys.

With this huge breakthrough, the Lear’s Macaw has reached one of the most important phases in its recovery, and its integration into the natural environment will continue to be monitored by Brazilian scientists – led by biologist Erica Pacifico, General Coordinator of the release project – who, in direct connection with experts from the Loro Parque Foundation, will continue to monitor the evolution of the process.

This project has been possible thanks to the important support and collaboration of Brazilian and international institutions that were fundamental in different phases of the release project: expert researchers of the Research and Conservation Group of the Arara-Azul de Lear, through Qualis Consultoria Ambiental; actions executed within the National Action Plan for the Conservation of the Species; Enel Green Power Brazil, in charge of the integral financing of the project and the Community of Cercadinho, Campo Formoso / Bahia.

Also relevant for their support have been the Architecture Association of Cristina Dénes, for the creation of the project of construction of the nursery of adaptation of the araras in the Area of Freedom of Wild Animals, and the collaboration of Antonio Carlos Canto Porto Filho and Francisco Antonio de Oliveira, for the donation of materials.  Also: the National Centre for Research and Conservation of Wild Birds; the Fazenda Cachoeira Scientific Hatchery for conservation purposes; the Centre for Conservation and Management of Caatinga Fauna (CEMAFAUNA); the National Cente for Research and Conservation of Wild Birds (CEMAVE); the Scientific Hatchery for conservation purposes; the Bahia Institute of Environment and Water Resources (INEMA); the Max Planck Institute of Environment and Water Resources of Bahia (INEMA); the Institute of Biodiversity Development (ICMBio); the Institute of Wild Spaces (IES); the Institute of Ornithology (MPIO); the Zoology Museum of the University of São Paulo (MZUSP) and Nitro Imágenes, a multidisciplinary team that has made it possible for Tenerife macaws to fly in Brazil.